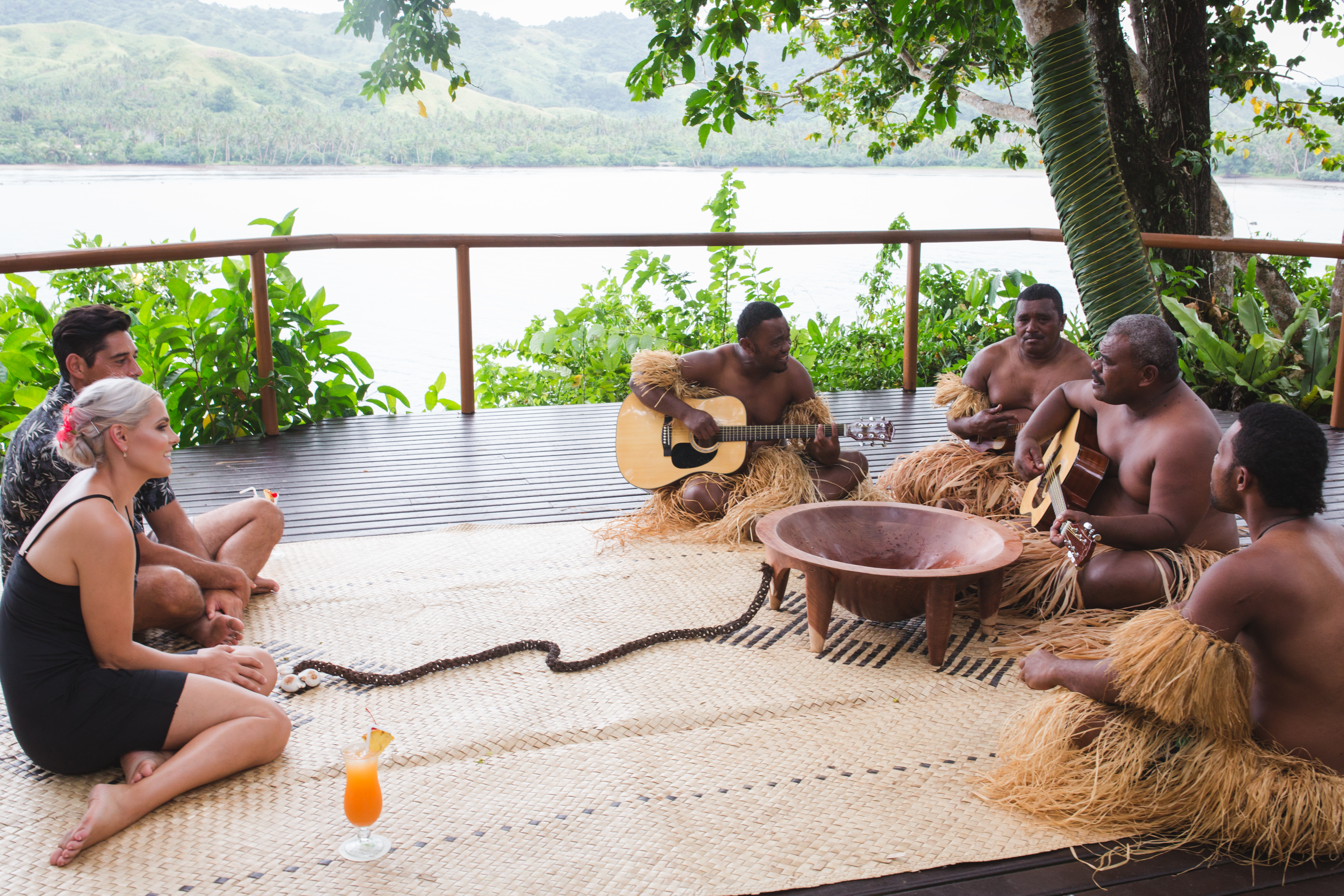 Fiji is rich with culture and traditions that make for happy Fijians and blissful guests. Native Fijians are among the happiest in the world, and once you’ve arrived in the country of more than 300 islands, it’s not hard to see why. The opal-blue waters, palm tree lined beaches, and breathtaking mountains mean there is no shortage of incredible landscape—and water!—to explore. But even beyond the startling beauty of Fiji, the culture of the people here is warm and endlessly hospitable. Fijians value family and community, and villages work together to look out for one another. The warmth of Fijian culture is undeniable, and it’s one of the reasons travelers return again and again.

When visiting Fiji, you’ll be greeted with one essential aspect of the welcoming Fijian culture—the Kava ceremony. Kava—a traditional Fijian drink—is a mildly sedative drink made when the crushed root of the yaqona (pronounced yang-GO-na) plant, a relative of the pepper plant, is strained with water into a large communal bowl. The drink was historically made by cutting yaqona roots into small pieces, which were then chewed (generally by children or young women) and spat into a bowl, where the contents were mixed with coconut milk. The chewing of the root was believed to extract the active ingredients while producing a more delicious beverage. However, this practice is no longer common except among some locals. Though kava is not what most people would deem traditionally delicious, it is described by many as tasting somewhat like bitter, peppery, muddy water – but don’t let that deter you from the once-in-a-lifetime experience! 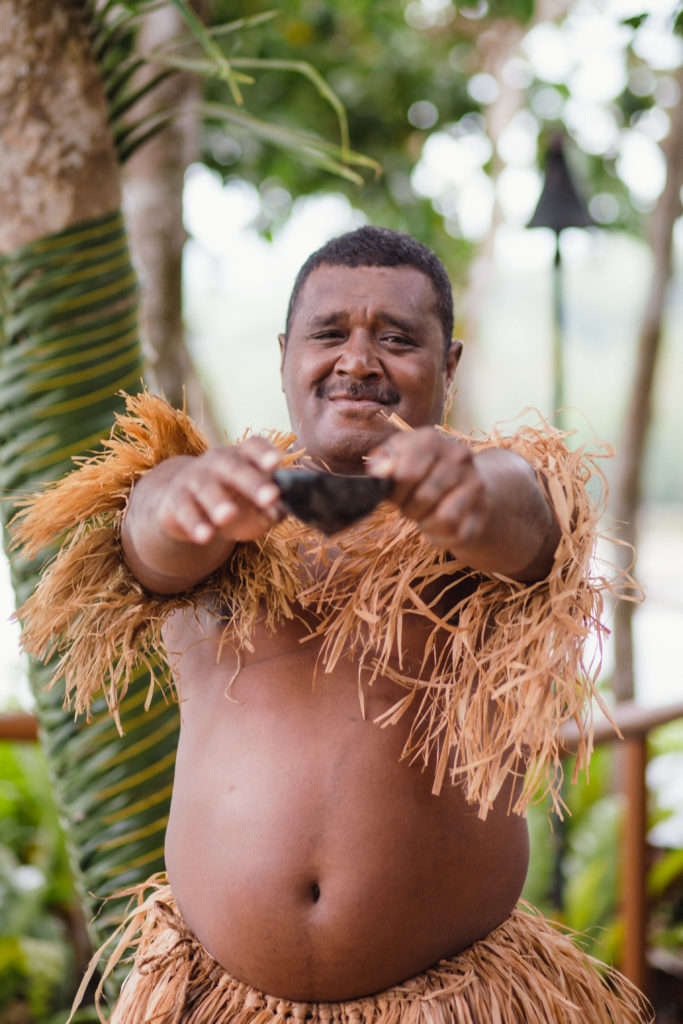 Also called yaqona after the name of the plant itself, or “grog” by locals, this ceremonial drink creates a relaxed feeling for the drinker, and can result in some numbness around the mouth, lips, and tongue. Still, the most enjoyable aspect of kava is the ceremony and hospitality surrounding the drinking of it. Kava is part of Fijian life and accompanies any important occasion, from the welcoming of visitors to blessing new homes to settling arguments. You’ll find Fijians participating in the yaqona ceremony as a way to show respect, welcome, or simply encourage friendliness and camaraderie amongst family and friends. When you are offered kava with the phrase “E dua na bilo?” (“Try a cup?”), know that you are being offered warmth, relaxation, and respect. Hard to refuse, wouldn’t you say?

Yaqona is more common than alcohol in Fiji because it is consumed in a different way. The ceremony surrounding the drinking of the national beverage unites folks and makes even the weariest traveler feel welcomed. Kava is used to bring people together. Traditionally, kava is served to guests in bowls made from half a coconut and is given according to rank. Though kava drinking sessions are usually all male in Fiji, Fijians do not hesitate to offer kava to all guests, regardless of gender. 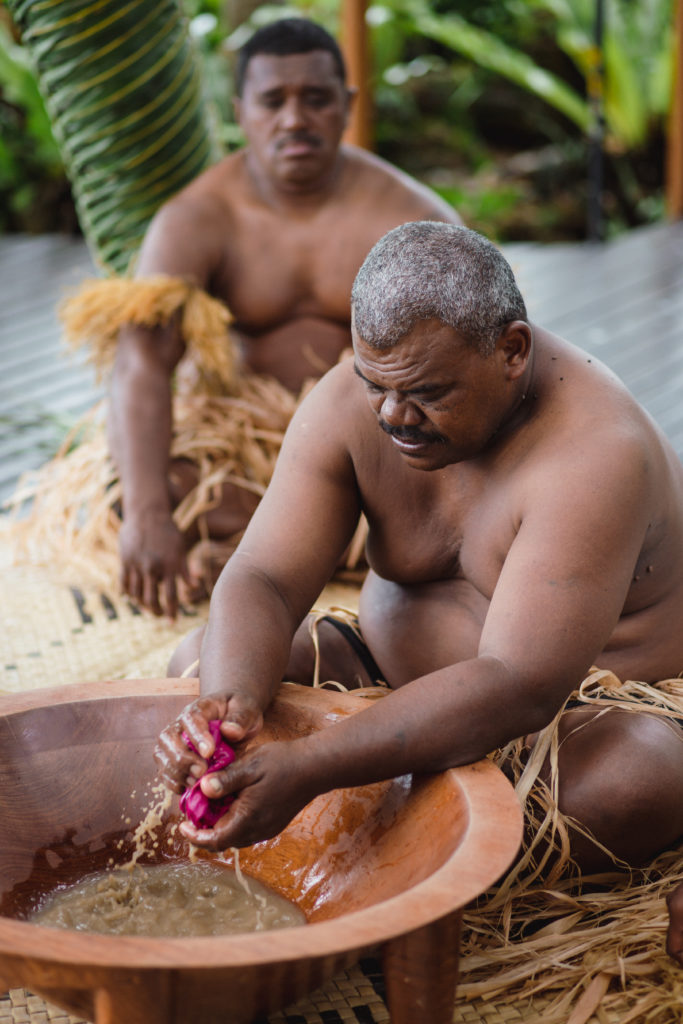 When kava is served to the guest, the guest will be offered “high tide” (a full cup) or “low tide” (a half cup). When receiving the kava and preparing to drink, the guest must clap once, say “Bula” (the Fijian word for hello and love, much like “aloha” in Hawaiian), and then, ideally, drink the cup in its entirety in one gulp, followed by three more claps. Though this process may leave your mouth feeling a bit numb, it will also result in a sense of serenity and cordiality. As kava induces a relaxed state in the drinker, this ceremony usually leads to friendly and gracious interactions, even among those who have just met. Fijians believe kava to be a social unifier, which is why it is often served to end or settle a disagreement.

However, kava is not reserved exclusively for special occasions. Many Fijians drink kava daily. It is not uncommon to see groups of friends or family sipping from a communal bowl together as part of a regular afternoon. Perhaps this is part of what contributes to the particularly contented culture of Fiji and what many visitors have referred to as “Fiji time.”

Participating in the kava ritual is a way to connect to Fiji’s past. When you visit, you can show respect when entering a village by presenting kava root (available at any local Fijian market) to your host. You’ll be showing that you have some understanding of the Fijian culture as well as beginning the kava ritual with honor.

This ceremony is a vital part of Fijian culture, and you’ll be greeted with a bowl at Namale’s weekly kava ceremonies as both a warm Fijian welcome and a sign of respect and appreciation for your stay at the resort. You’ll have the unique opportunity to begin your trip with an unforgettable ritual that connects you to the land and the people of Fiji.

Get a Personalized Quote

We’re swooning over this gorgeous photo of a st

The chefs are staying busy creating new recipes to

Low tide at Namale is easy to spot - the blowhole

Vinaka vaka levu (thank you so much) to Upward Cur

Are you ready to soak in a pool, watch a sunset an